The Shop Around the Corner is a 1940 American romantic comedy film produced and directed by Ernst Lubitsch and starring James Stewart, Margaret Sullavan, and Frank Morgan. The screenplay was written by Samson Raphaelson based on the 1937 Hungarian play Parfumerie by Miklós László. The film is about two employees at a gift shop in Budapest who can barely stand each another, not realizing they’re falling in love as anonymous correspondents through their letters.The Shop Around the Corner is ranked #28 on AFI’s 100 Years… 100 Passions, and is listed in Time’s All-Time 100 Movies In 1999, the film was selected for preservation in the United States National Film Registry by the Library of Congress as being “culturally, historically, or aesthetically significant.” The supporting cast included Joseph Schildkraut, Sara Haden, Felix Bressart, and William Tracy. 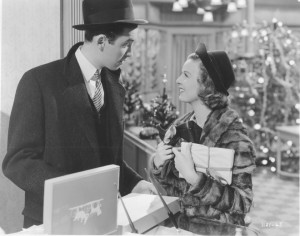 Alfred Kralik (James Stewart) is the top salesman at a gift shop in Budapest owned by the high-strung Mr. Hugo Matuschek (Frank Morgan). Kralik’s coworkers at Matuschek and Company include his friend, Pirovitch (Felix Bressart), a kindly family man, Ferencz Vadas (Joseph Schildkraut), a two-faced womanizer, and Pepi Katona (William Tracy), an ambitious, precocious delivery boy. One morning, Kralik reveals to Pirovitch that he’s been corresponding anonymously with an intelligent and cultured woman whose ad he came across in the newspaper.
Kralik is Mr. Matuschek’s oldest and most trusted employee—just invited to a dinner party at Matuschek’s home—but lately there has been tension between the two. They get into an argument over Mr. Matuschek’s idea to sell a cigarette box that plays “Ochi Chërnye” when opened. Kralik thinks it’s a bad idea. Although annoyed with Kralik’s stubbornness, he is reluctant to ignore his judgement. After their exchange, Klara Novak (Margaret Sullavan) enters the gift shop looking for a job. Kralik tells her there are no openings, but when she is able to sell one of the cigarette boxes (as a candy box), Mr. Matuschek hires her.
Later that year as Christmas approaches, Kralik is preparing to finally meet his mystery correspondent for a dinner date. Planning matrimony if the date works out, Kralik requested a raise from Mr. Matuschek who has not been in a good mood for months. Forced to put up with the pesky Miss Novak—the two simply cannot get along—Kralik is grateful that his anonymous correspondent is nothing like her. He admits to Pirovitch that he is nervous about meeting this “most wonderful girl in the world” for the first time.
Kralik’s planned meeting is interrupted when Mr. Matuschek demands that everyone stay late after work. He and Kralik argue when Kralik mentions his previous engagement. Later Kralik is called into Mr. Matuschek’s office and fired. No one in the shop understands Mr. Matuschek’s actions; they do not know that Mr. Matuschek suspects Kralik of having an affair with his wife. Later, he meets with a private investigator who informs him that his suspicions were correct, that his wife is having an affair with one of his employees—Ferencz Vadas. Pepi arrives back at the shop just in time to prevent the distraught Mr. Matuschek from committing suicide.

James Stewart and Margaret Sullavan
Meanwhile, Kralik arrives at the Cafe Nizza, where he discovers that his mystery woman, with the red carnation as planned, is in fact Klara Novak. Despite his disappointment, Kralik goes in and talks with her, pretending he is there to meet Pirovitch. In his mind, Kralik tries to reconcile the cultured woman of his letters with his annoying coworker—secretly hoping that things might work out with her. Concerned that Kralik’s presence will spoil her first meeting with her “far superior” mystery correspondent, she calls Kralik a “little insignificant clerk” and asks him to leave, and he does.

Later that night, Kralik goes to the hospital to visit Mr. Matuschek. After apologizing for his behavior, Mr. Matuschek offers him a job as manager of Matuschek and Company, gives him the keys to the shop, and asks him to dismiss Vadas quietly. Grateful to Pepi for saving his life, he promotes the errand boy to clerk. The next day, Miss Novak calls in sick after her mystery man failed to show. That night, Kralik visits her at her apartment, where she reveals her problem to be “psychological”. During his visit, she receives a letter from her correspondent and reads it in front of Kralik (who wrote the letter).

The next day, Christmas Eve, Matuschek and Company enjoys records sales; a grateful Mr. Matuschek gives everyone their bonuses and send them home early. Left alone in the shop, Kralik and Miss Novak talk about their planned dates for the evening—Miss Novak revealing that she had a crush on Kralik when they first met, back when she was foolish and naive. After pretending to have met the overweight, balding, and unemployed mystery man, Kralik puts a red carnation in his lapel and finally reveals to Miss Novak that he is in fact her mystery correspondent—her “dear friend”—and the two kiss and embrace.