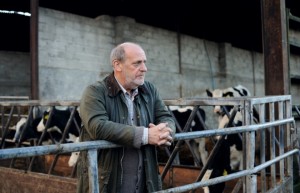 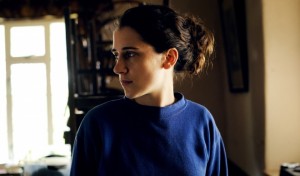 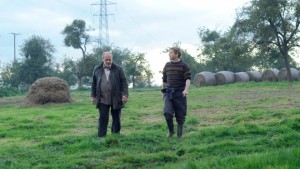 After her brother’s suicide, a young woman returns to her family farm to confront her brooding and embittered father, in the beautifully controlled and emotionally precise feature debut by Hope Dickson Leach.

This even-handed tale about a young woman who returns home to the family farm marks Hope Dickson Leach as a talent to watch. The Levelling is unadorned and efficient filmmaking, its style careful and respectful, its setting beautifully captured but never overly aestheticized. Its story of a daughter trying to reconcile with her father continues a timeless tradition of delicately told tales of family relationships gone wrong.

Clover (Ellie Kendrick), the film’s clearheaded young protagonist, comes home to Somerset after learning that her younger brother Harry has killed himself. There she is met by her sullen father, Aubrey (David Troughton), a brooding hulk of a man whose past woes have derailed his life. Quiet and dour, unable to express himself, he finds himself trapped in quiet anger. The farm is in disrepair. Recent floods have rendered the main house uninhabitable, and Aubrey lives in a trailer. Harry was meant to take over the farm, but those plans also lie in ruins. It is not long before the simmering emotions between father and daughter break out into undisguised war. Clover instinctively blames Aubrey for the death of her brother and is determined to get to the truth. Aubrey, ex-army, has his own issues to deal with.

Amid these tensions, there is the reality of running a failing dairy farm, which grows even more troubling as local authorities begin to ask questions about the health of the herd.

The Levelling is exceptionally well-directed, relentless in its logic, and maintains a cool approach to a subject that could have been incendiary in another filmmaker’s hands. Nevertheless, Dickson Leach ensures that the underlying emotions are carefully observed, released, and addressed. This is a small jewel of a film.