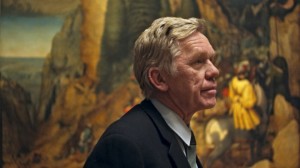 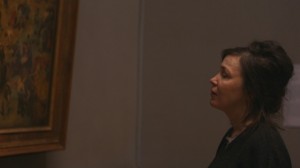 Given unprecedented access to one of the world’s great museums, Vienna’s Kunsthistorisches Museum, Jem Cohen has crafted a delicately overwhelming narrative about observation, loneliness, the city, the transience of all things and how art shapes and reflects daily experience. And a whole lot more.

In an unremittingly gray Vienna cityscape, two people unite – museum guard Johann (Bobby Sommer) and Anne (Canadian music legend Mary Margaret O’Hara), a first-time visitor from Montreal who has come to Vienna to attend to a hospitalized distant cousin. In this late capitalist, Internet age, they get to know each other through personal contact and conversation, both inside the museum itself and in ersatz representations around the city (the hospital, a café with walls lined with photographs).

The key scene in Museum Hours takes place in the majestic Bruegel room, where a guest lecturer argues that Bruegel gave landscape in and of itself its due tor the first time, and proposes alternative interpretations for the focal points of his paintings.

This interpretive speech clarifies all the inserted 16mm fragments of Vienna cityscape that came before, and changes the way one sees things after: Cohen has constructed a radical work poised between documentary and fiction where the boundaries of the frame are infinite. When you come to understand that everything is of equal value in this huge film, and you’re left to make your own connections between them, it’s truly liberating. – Locarno International Film Festival 2012