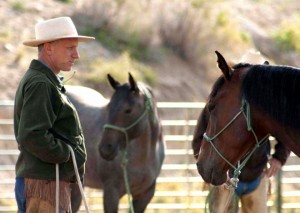 Buck is the gripping portrait of true-life horse whisperer Buck Brannaman, a cowboy who was abused as a boy and taught himself horse training and has worked as consultant to the film industry.

His first involvement in Hollywood was as consultant to the film The Horse Whisperer (Robert Redford, 1998). His methods quickly proved effective—he recounts waiting eight hours on set for something he got a horse to do in fifteen minutes—and now, people travel all over the country to attend his training clinics.

First-time director Cindy Meehl, who used to be a very successful New York-based fashion designer, has crafted a pitch-perfect documentary about a rather masculine subject. The story never loses its momentum and is funny and inspirational in all the right ways.

Buck’s hard-luck backstory provides the thrust of this documentary: his father beat him and his brother relentlessly after his mother died; the two were eventually placed in a foster home.

A trick rider from the age of three, Buck was around horses his whole life, and attributes his psychic connection to horses with his own experiences of what it’s like to be dead-frightened of another person.

Buck’s forwardness about his feelings throughout the film is an eye-opener; who’d have thought a real-life cowboy would be so in touch with his own psyche?

Though all the praise that’s heaped on Buck can get slightly repetitive at first, once the film reveals his horse-training technique it’s hard not to be admirative. He can break in and saddle a horse in just a few minutes.

Through the discreet lens of Meehl’s camera Brannaman advises his protégés on everything from proper riding form to how to communicate with their horses non-verbally. He really does seem to understand horse psychology; there were gasps from the audience every few minutes as another marvel of man-horse bonding played out on the screen.

The film’s climax comes when a woman with an unruly stallion shows up at one of Buck’s clinics and her horse attacks one of his assistants. It’s a terrifying moment; we’re so used to seeing horses as utilities in the movies—like cars with legs—just waiting for the hero to hop on and race towards the sunset. It’s easy to forget that horses have a mind of their own, and can wreak havoc if they don’t want to cooperate.

After the incident, Buck tells his students in no uncertain terms that in this case, “the human failed the animal.” It’s a powerful lesson.

Maybe if everyone in this country had a good dose of Buck wisdom we’d be a little bit better off. – Lita Robinson, Screen Comment