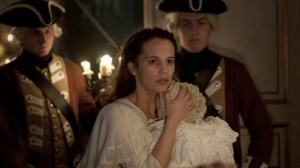 Johann Friedrich Struensee, town physician and doctor to the poor of Altona – then governed by the King of Denmark, Christian VII – accompanies his monarch in 1768 on the latter’s year-long trip around Europe. During the journey, he gains the trust of the psychologically unstable king and is made his personal physician. But Struensee wants more: together with Queen Caroline Mathilde, who falls in love with the handsome and assertive medic, he increasingly takes over state affairs. Committed to the grand ideas of European enlightenment, he implements freedom of the press and of expression, abolishes torture and serfdom, reforms the school system and curtails the privileges of the aristocracy. The aristocrats, however, fearing for their wealth and power, refuse to take this ‘blasphemous activity’ lying down. Eventually, the reformer ends up on trial. Based on actual historical events, A Royal Affair creates a mixture of historical-political thriller, romance and tragedy. The drama of a man decades ahead of his time (seeking to implement the ideals of the French Revolution in Denmark before it even began) is also an allegory about the conflict of progressive and reactionary forces – and a story of passionate and forbidden romance. – Belfast Film Festival 2012