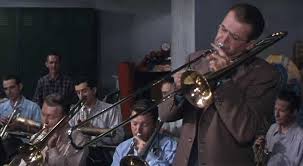 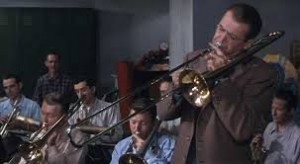 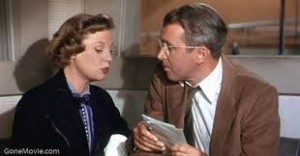 The Glenn Miller Story traces Miller’s rise from pit-orchestra trombone player to leader of the most successful big band of his era. Given an officer’s commission during World War II, Miller helms the swingin’est military band ever heard.

June Allyson beams and twinkles as Miller’s practical wife Helen. Stewart, looking remarkably like Miller, is disarmingly eccentric. They make an exemplary American couple, finding the road to success lined with nice friends, swirling Variety headlines, and key moments like Glenn saying to wife (long-distance), ‘My number’s Pennsylvania 6-5000’. It may seem all a bit too easy but it works beautifully, especially if you like the music.

Henry Mancini was the musical director leading a credible homage to Miller’s particular ‘sound’. Watch out for Louis Armstrong leading a jam session on Basin Street Blues in a speakeasy in Harlem, and singer Frances Langford doing Chattanooga Choo-Choo in a well-boned strapless dress.